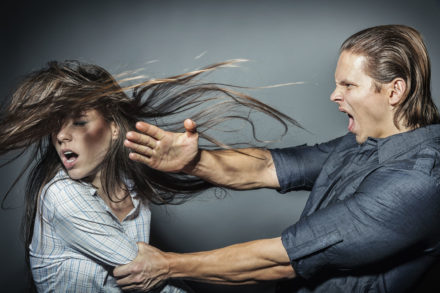 Domestic Abuse Charges in Oklahoma are prosecuted aggressively by the OKC district attorneys office. Recently an Oklahoma City area police officer currently faces charges on domestic abuse against her husband.  The couple was in an argument, which became physical.  During the physical fight, the police officer struck her husband in the head using a curling iron.  The husband is said to have significant injuries from the altercation.  While this accusation of domestic violence appears to have merit, some accusations are not true.  They are simply a form of revenge against an ex-partner or family member.  False allegations commonly occur in custody battles for instance.

Oklahoma has laws against domestic abuse.  Under 21 O.S. §644(c), it is a basically a battery against certain people.  These people include spouses (former or current), a child or elderly person, family members, romantic partners, co-parents, and/or roommates.  This basically means anyone you have or had a dating relationship with, anyone you have a child with, or anyone you live with.

Domestic Abuse and the Consequences

Domestic abuse, due to its prevalence, is punishable by hefty fines and sentences.

1st offense—A first offense is punishable by a year imprisonment.  This may also include fines reaching $5,000.  However, the offense is a misdemeanor.

2nd offense—A second offense though, is a felony.  You face up to 4 years imprisonment for a second offense.  Fines may still reach $5,000.  Felonies remain on your record and must be expunged in a later process unless you cut a plea deal during trial.

Our Oklahoma City Domestic Abuse Attorneys Can Help You

If you are in a situation where you face domestic abuse charges, let our criminal defense attorneys know.  We understand that situations sometimes get out of hand.  While you may not mean to commit domestic violence, you may still face the charges.  Our OKC attorneys will fight for your right to a fair legal process.  If the allegations are false, we will fight for the truth to come out.  Our first consultation is free so call 405.367.8710