Oklahoma Child Abuse is a charge that the Oklahoma District Attorneys Office aggressively prosecutes. In May of 2017 an Oklahoma couple was 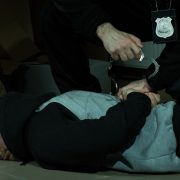 placed under arrest for child abuse.  The woman’s two year old son had injuries consistent with prolonged abuse.  These include: 17 rib fractures, a partially healing left shoulder fracture, torn skin in his tongue and lips, rectal trauma, and two missing front teeth.  Further, the child’s step-father and mother had conflicting stories.  The child’s biological father has been contacted.  The law sees this type of child abuse as clear.  However, sometimes child abuse accusations are weapons people use during custody battles and visitation proceedings.  You do not want to find yourself embroiled in bogus accusations of child abuse.

Oklahoma’s child abuse laws are found under Title 10A.  Section 1-1-105 in particular has the definitions for it.

Title 10A § 1-1-105(2)—ABUSE:  the threat of harm or actual harm to the health, safety, or welfare of a child by a person responsible for the child. (This does not include reasonable forms of discipline such as spanking, paddling, or switching.)

(2)(a)—HARM OR THREATENED HARM:  This must not be accidental.  The harm must beintentional or knowing.  Thus, any injury to a child that you do not prevent, but allow to continue is often part of “child abuse” under Oklahoma law.

The abuse or harm can come in many forms: physical, emotional, mental, or even neglect.  Neglect is common in  the form of failure to protect a child from domestic abuse and exposing the child to harmful situations.  It can also be in the form of not providing for adequate medical, dietary, or clothing needs of a child.

Penalties for Child Abuse in Oklahoma

The first and most obvious penalty of child abuse is the loss of custody.  Children in abusive situations often go to the custody of the State or to a trustworthy family member.  Further, child abuse is a felony.  This means it will remain on your permanent record unless you apply for an expungement.  You are facing one year up to life in prison depending on the severity of the abuse and fines reaching $5,000.  On top of these fines, you will also have to pay for medical, therapy, and other evaluations regarding the health of the child.

Our office has years of experience representing clients in domestic situations.  As a result, we understand that divorce and custody battles can become vicious.  If you are facing bogus child abuse charges we can help.   Our first consultation is free.