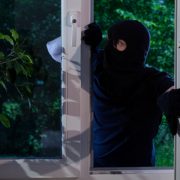 Okla.Stat.Ann. Tit. 21 § 1431 defines first degree burglary.   The main elements are (1) breaking into a dwelling place in which an unsuspecting person is present (2) while using a weapon or having an accomplice present during the break-in and/or (3) picking locks or using false keys.

“[Anyone] who breaks and enters any building…., room, booth, tent, railroad car, automobile, truck, trailer, vessel or other structure or erection, in which any property is kept, or breaks into or forcibly opens, any coin-operated or vending machine or device with intent to steal any property therein or to commit any felony, is guilty of burglary in the second degree.

Thus, the difference between first and second degree burglary is mainly if a person is present in the area broken into and if an accomplice or a weapon is used in the process.  These differences can impact the court’s sentence greatly.

Our Oklahoma City Burglary Attorneys explain that the penalty you face depends on the the type burglary. The penalties for burglary are felonies and include jail sentences in the State Penitentiary, possible restitution to victims, and as a result disqualification from certain jobs.  The important difference between second and first degree burglary though is the amount of jail time.  A conviction of first degree burglary can result in prison time of 7 to 20 years.  A second degree conviction however, is only 2 to 7 years.  Thus the difference of 13 years is significant, and worth hiring a good lawyer over.

Our Oklahoma burglary attorneys understand that having a felony on your record is a serious issue.  We also know that a thirteen year difference between the two penalties is life changing.  Let us defend you with the best possible defense.  Our first consultation is free.